Building an award that every property market stakeholder can value and trust is not an easy task. Even with the collaboration of two highly credible organisations with mutual goals to elevate the industry, the step forward took over nine months to formulate and finetune an accolade that would fill a gap in recognising reputable developers and their developments.

The aim is to recognise the well deserved local property developers for their effort and hard work in building the nation. These awards aim at boosting developers to reach for higher innovation and greater performance, said FIABCI-Malaysia president Datuk Seri Koe Peng Kang.

“Those of us who have been in the industry for many years are aware that there is a gap that needs to be filled,” he said, adding that there is a multitude of property awards in Malaysia’s real estate landscape, each vying to be the voice of authority and standard-bearer for the industry.

This creates confusion and lingering doubts, especially for consumers who are bombarded with conflicting information. However, with two reputable entities FIABCI-Malaysia and SMG acting as the stronghold, both parties can provide the much-needed clarity to real estate stakeholders.

The Malaysia Developer Awards are carefully crafted to provide credible and holistic benchmarking of the industry for property developers and consumers alike, he said.

This ensures that the MDA will become the gauge for buyers and investors to make informed decisions when it comes to buying or investing in a property or believing that the developer will deliver the envisaged development as promised.

Beyond recognising the most well-deserving property players, the awards also set its sights on the long term development of the industry, added SMG group chief executive officer Alex Yeow.

“We hope that with the recognition of the best of the best, we will be able to promote healthy competition amongst the property players by inspiring them to push boundaries.

“The Malaysia Developer Awards’ is only in its first year, but every single aspect of its blueprint and construction, from the categories to the criteria, was given due attention. It is moulded to be an award that will be trusted by all – developers, investors and consumers alike, serving as the assurance they need to make informed decisions,” he said.

In short, the awards will serve to validate that the companies they are dealing with are reputable and their developments are of sound quality.

This also means that property developers hoping to gain an MDA trophy would have to undergo stringent criteria to meet the standards mapped out. 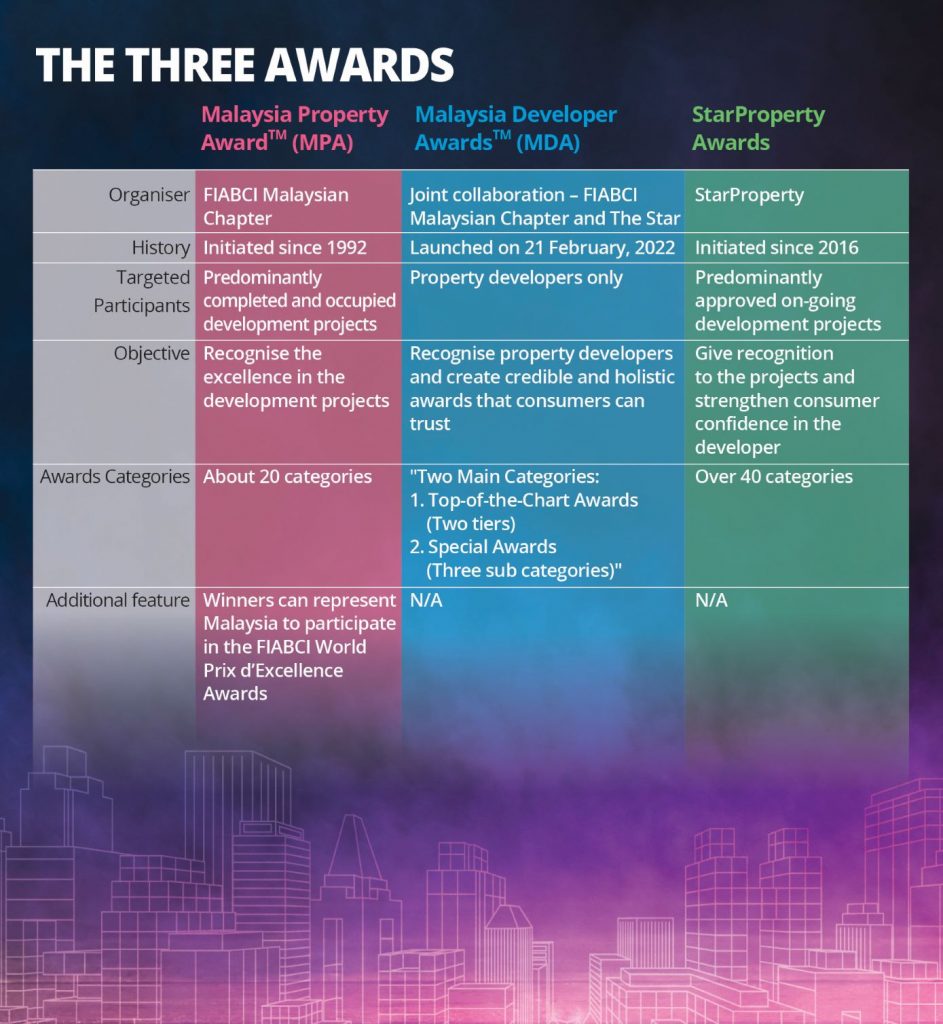 The MPA has the principal objectives of elevating the overall standards of the construction and building industry, raising the bar for quality real estate development whilst encouraging healthy competition among developers and builders in innovation, quality, sustainability and delivery, said Koe.

The project-oriented award, held annually for 30 years, was the first of its kind in Malaysia, and the winners have the option to further compete in the international level of FIABCI Prix d’ Excellence Awards, held annually in Paris.

In summary, with the creation of the new MDA, both FIABCI-Malaysia and SMG have now completed the grand slam of real estate awards, in recognition of deserving property developers through their exceptional performance and contribution to the nation as well as the projects that have propelled Malaysia onto the international platform.

It is essential to note that the three awards are fundamentally different in their entirety. The new award recognises property developers, whereas the MPA recognises completed development projects, while the StarProperty Awards acknowledges the on-going projects.

The MDA categories and judging criteria are set to distinguish the new awards distinctively. Nevertheless, the judging process is as stringent as the MPA and StarProperty Awards.

The MDA divides the awarding of developers into two main categories, namely Top-of-the-Chart Awards and the Special Awards.

The Special Awards comprise three sub-categories – The International Awards, Transformation Awards, and The Rising Star Awards, which will be given to the Top three developers.

To ensure a fair and credible assessment of the participating property developers, about 15 judges from an array of property-linked industries, organisations and institutions have been invited to judge the entries. In addition, one of the Big Four accounting firms, KPMG is engaged to validate the financial figures and the process of evaluation.

Drawing on the experience of FIABCI-Malaysia, both participants and the public, in general, can rest assured that the evaluation process is on par with international standards.

“The MPA which has a history of 30 years in Malaysia is well-known for its stringent evaluation process, which makes the award something every developer yearn for.

“However, after awarding merits to excellent projects for 30 years, we believe it is time to recognise those nation builders, as they have been working hard to outperform their peers in crafting more innovative masterpieces. And this is made possible through MDA.

“Development projects are like an art piece, without the artists, never will we live to see such beautiful and astonishing projects, they should be appreciated too. Now it is time we embark on another new award while continuing our very own Malaysia Property Award™,” said Koe. 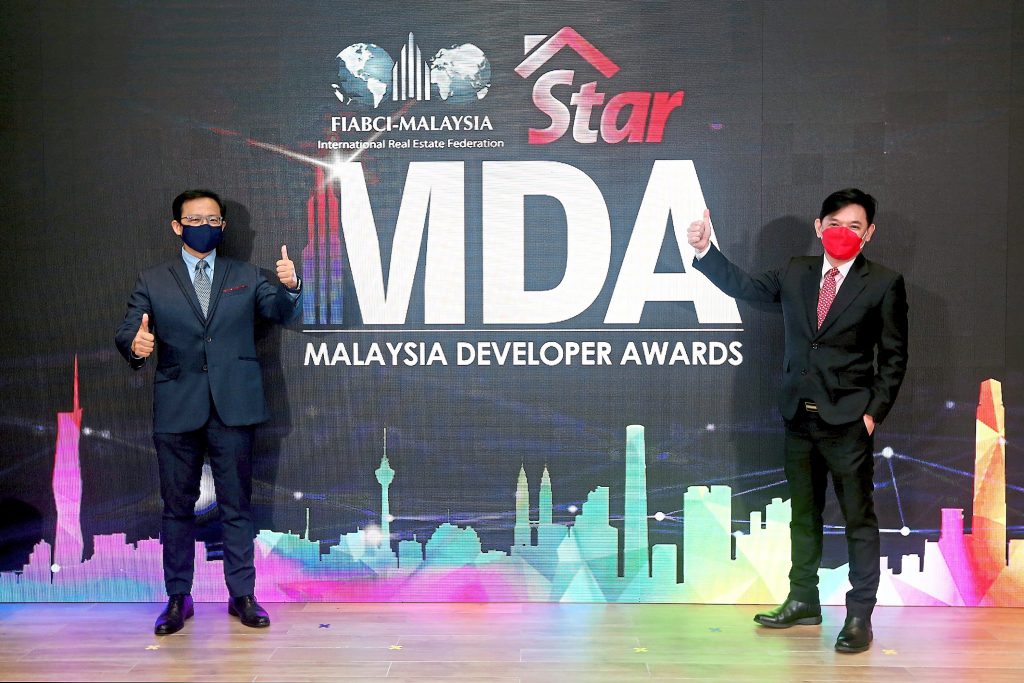 Koe (left) and Yeow at the recent launch of the Malaysia Developer Awards. — IZZRAFIQ ALIAS/The Star