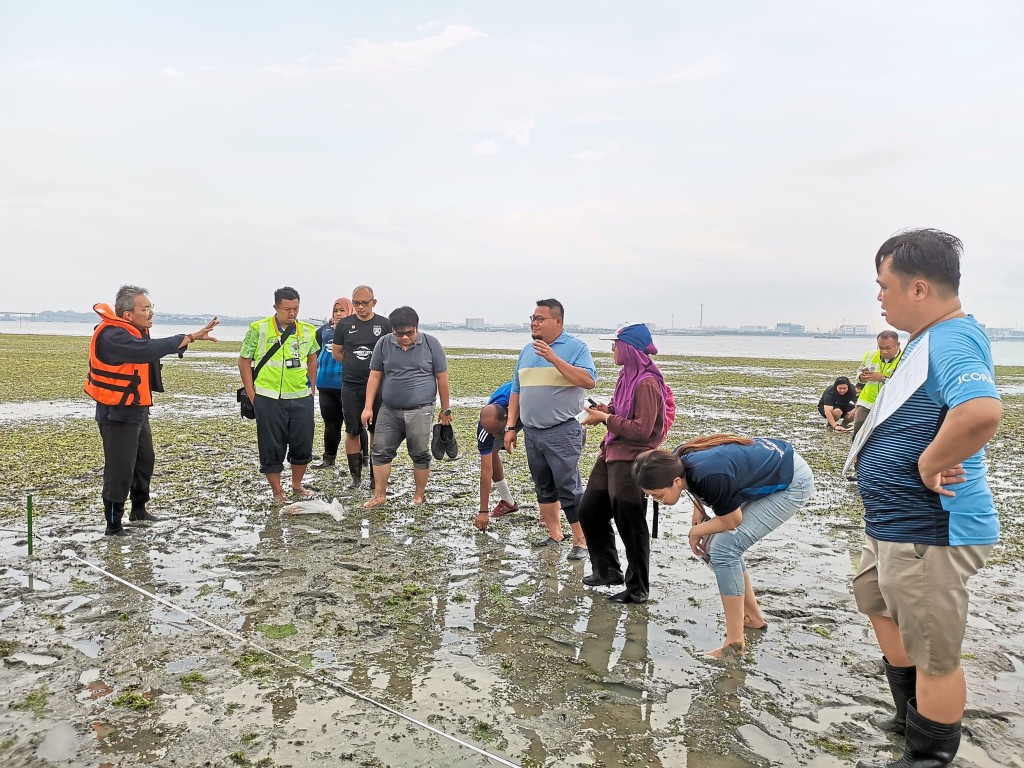 The mangrove forest, surrounding the 36-hole golf courses in Gelang Patah, Johor designed by renowned Jack Nicklaus and Liang Guokun, was given priority to ensure its sustainability.

The golf courses are Legacy and Classic Golf Course spanning 183 and 172 acres respectively, with a third yet-to-be-named golf course in the works.

Despite the rapid construction, the developer of this mega project is putting greater efforts to ensure environmental sustainability and consistency aligned with the development. “It is really a challenge for us to have a world-class golf course built near a natural water feature surrounded by mangroves. In addition to conserving the existing mangroves and ensuring that they are not affected during the construction process, we also face the challenge of illegal logging,” said senior landscape officer Muhammad Syafiq Abdullah. 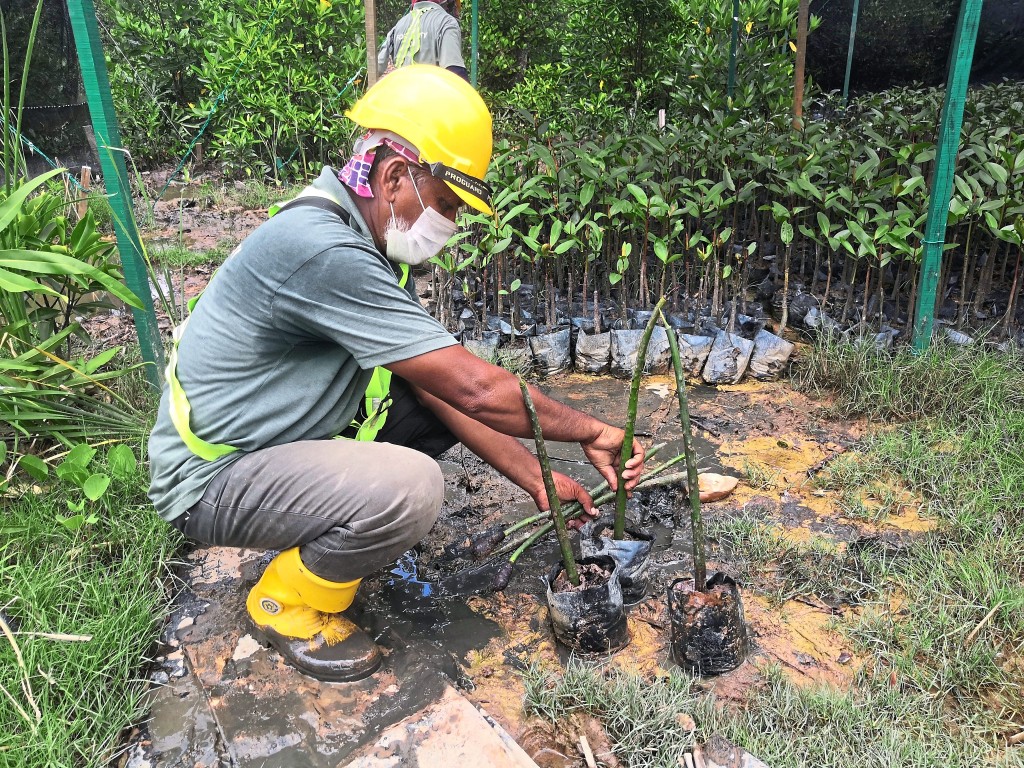 Mangrove saplings were planted in the Forest City nursery to be transplanted later.

He said the landscape unit had to work closely with the project, property management and auxiliary police in ensuring the mangrove areas surrounding the project were protected and conserved during the construction period.

The 28-year-old who originated from Sungai Petani, Kedah, graduated with Bachelor in Marine Science from Universiti Malaysia Terengganu (UMT) in 2013. “Prior to joining the company, I was the research assistant at the university from 2013 until 2017, specialising in mangrove studies,” said Syafiq.

He attributed his time working with UMT as valuable due to his experience in mangrove conservation. This was relevant and helpful when he joined Forest City in July 2017.

Syafiq oversees a team of 30 staff in the company’s landscape unit involving conservation activities, monitoring the coastline with mangroves, collecting seeds and germinating them in the nursery.

“We have come out with a win-win situation, building the world-class golf courses and at the same time ensuring the mangroves will continue to thrive in their natural surroundings,” said Syafiq.

He added that unlike trees, mangroves could not be uprooted and replanted elsewhere as their chances of survival were low and would eventually die. “It is better to leave them in their natural surroundings or habitat, and these sturdy plants could survive up to 60 years,” said Syafiq. 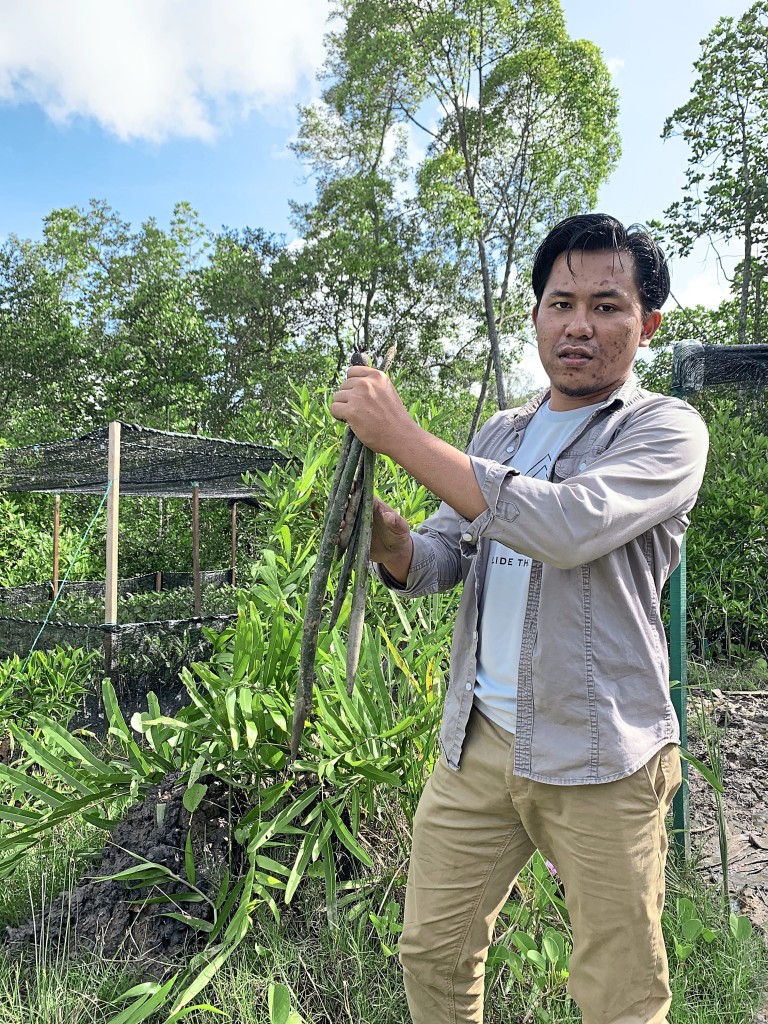 He said there were about 40 mangrove species in Malaysia. Among the species found along Johor coastline are rhizophora apiculata, rhizophora mucronata, bruguiera cylindrica, sonneratia caseolaris and avicennia sp.

“It is important to protect mangroves as they are a good indicator to determine healthy water conditions,” said Syafiq.

He added mangroves acted as a filter to prevent sediments from flowing into the sea and a buffer zone to prevent coastal erosion. He said mangroves are also the breeding grounds for mud crabs, mudskippers, mud creepers and migratory birds such as egrets and the milky stork.

“Monkeys also come to mangrove areas for food, and it is important to maintain the ecosystem for the primates and other creatures,” said Syafiq. Apart from mangroves, Forest City took into account the existence of seagrass during land reclamation activities for the multi-billion ringgit Forest City project.

Syafiq pointed out, unlike mangroves, seagrass could be replanted once the land reclamation was completed and would be able to adapt to the new environment. “We are happy to note the seagrass is doing well and it shows that the water quality is good,” he said. 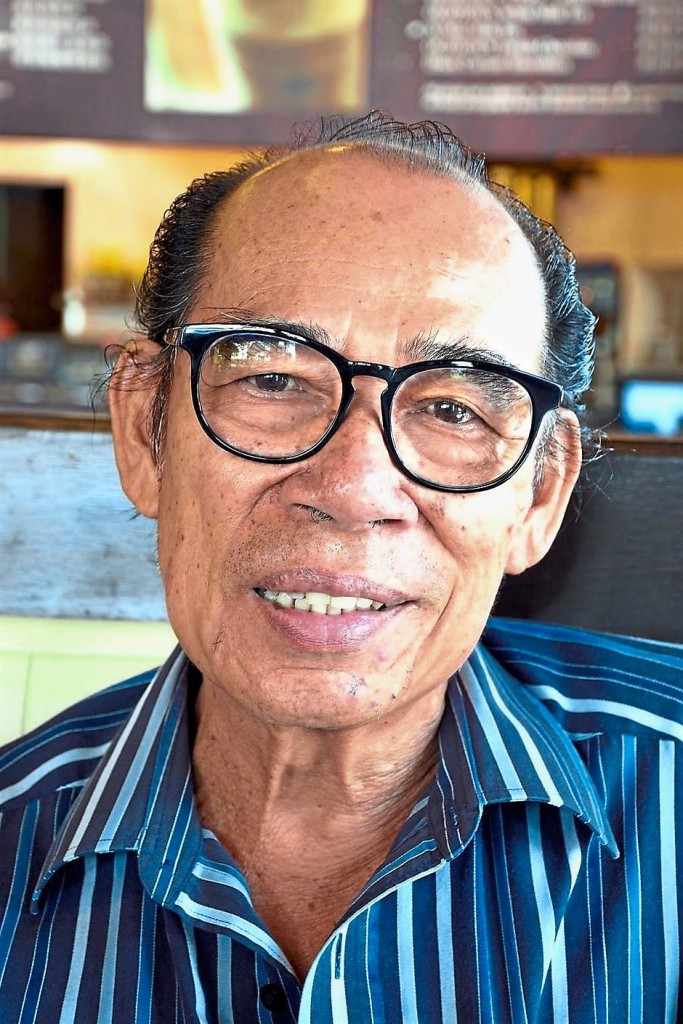 “However, they should not be overharvested to ensure their sustainability,” said Syafiq, adding that engaging and educating the locals on mangrove and conservation project was vital.

He said feedback from locals revealed that they came across dugongs feeding on the seagrass during high tide and this was an indicator that the seagrass protection was a success.

Various efforts have been made by Forest City to ensure that the seaweed around Forest City is protected. Based on UPM’s observation, control measures were implemented, including double-layer silt screen installation, water quality monitoring, seaweed meadow population size, and transplanting efforts.

Other than conservation, Forest City intended to educate the community on Forest City’s ecosystem and nature by sharing the knowledge through the establishment of an eco-museum.

The first phase of the museum will be completed by March 2020. Covering 110 sq metres, it will house two exhibition halls.

Through it, visitors can learn more on Malaysia’s precious nature, as well as flora and fauna within Forest City and its ecosystem. “Forest City can be a good example where nature and development could go side-by-side to ensure the environment is well protected for the future generation,” he said.

More than meets the eye to mangrove forests 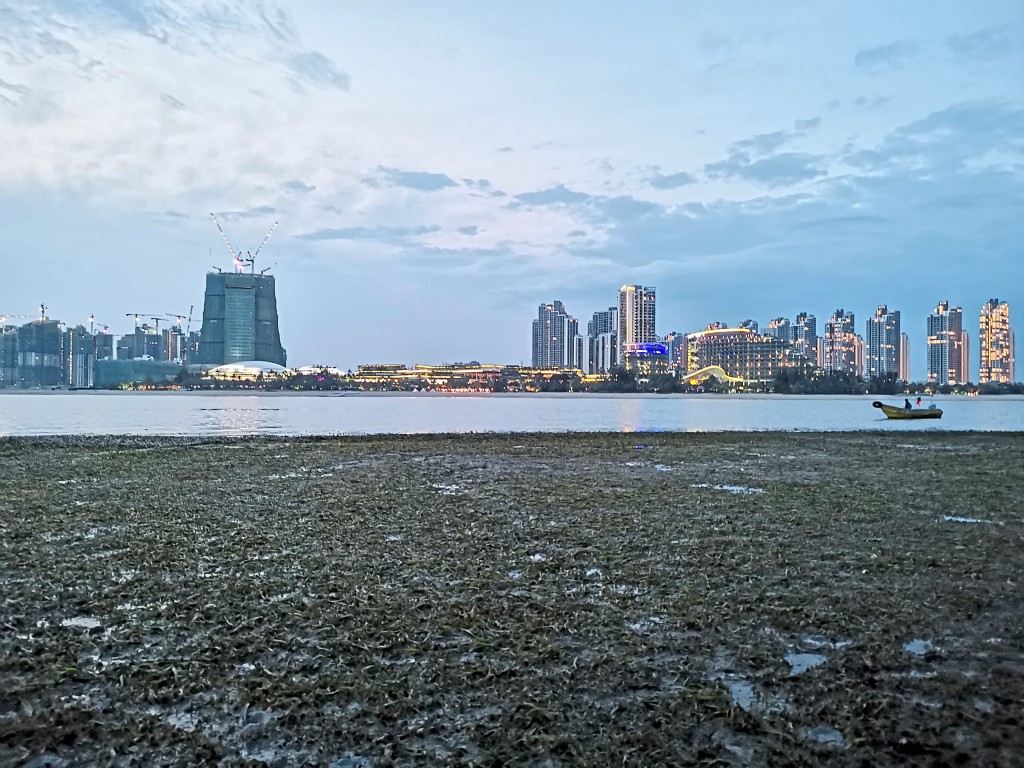 The common notion that mangroves forests are muddy, boring and dangerous places cannot be further from the truth. Moreover, these ecosystems are far more critical than previously thought.

“By looking deeper into the mangrove systems, we may understand better why they have to be conserved,” said Malaysian Nature Society (MNS) vice president Vincent Chow. From stabilising shorelines to helping the fight against global warming by removing carbon dioxide from the atmosphere, mangrove forests provide a habitat for thousands of species of marine life as well as animals from migratory birds to monkeys, he revealed.

“Researchers have reported that per hectare, mangroves store up to four times more carbon than other tropical rainforests,” he said. In addition, mangrove forests are part of the cycle of life as they provide shelter and food to populations of fishes that support the livelihood of communities of coastal fishermen.

Currently, the fishermen of Muar, Pontian and Batu Pahat are lamenting that the Straits of Malacca are depleted, and they are beginning to see poor returns from fishing. “Mangroves represent less than 0.4% of the world’s forest, but they’re disappearing three to five times faster than forests as a whole,” he said.

“It is apparent that as long as the loss of the coastal mangrove forests goes unchecked, we will lose more than just the natural buffer strip against strong winds and high waves,” he said.

If reclamation were well-planned with sufficient care and study of the sensitive habitats within, much of nature and its services could be retained, said Chow. 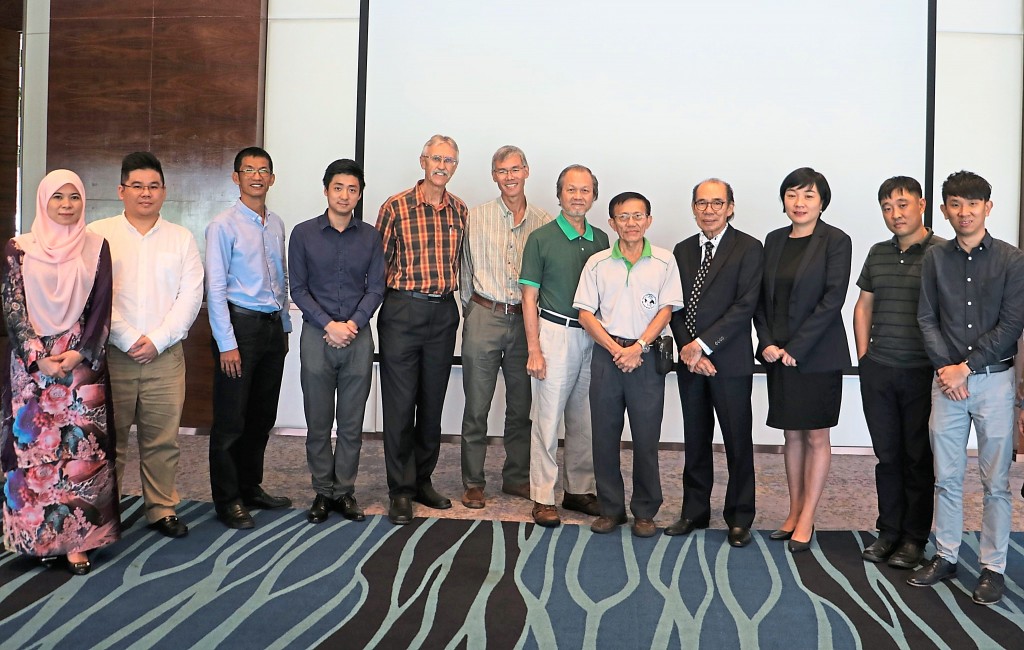 Representatives from Malaysian Nature Society together with Forest City seal the deal on nature protection by signing a memorandum of understanding.

With this in mind, development plans must incorporate mangroves into the design, making them more eco-friendly and greener. When mangrove forests are exploited for use, an integral part of this unique habitat and its related ecosystem are destroyed during land clearing.

Consultants must have drawn up the necessary mitigation measures for such projects but the state executive councillor for environment should be aware and give feedback to the public rather than firefighting when problems arise, he suggested.

Iskandar Regional Development Authority, which has conducted several in-depth studies over the years, may need to relook at problems faced by the coastal habitats before they are forever lost, he advised.

“There must be an updating of the state of the mangrove buffer strips along our state’s long shoreline. These sensitive areas must be protected legally, and all encroachment must be acted upon legally.

“It should take the initiative to form and finance a Coastal Protection Action Committee to engage all stakeholders to forestall further losses of coastal mangrove forests either to erosion or human encroachment,” he said.

Although replanting mangroves is a popular programme, much more could be done for the educational and information aspects. This is where the corporate sector can come in, to include this as part of their corporate social responsibility (CSR) activities, he said.

“One of the best ways is to set up a Marine Centre in Johor to avail to visitors printed references, preserved specimens, pictorial and digital presentations as well as on-hands learning experiences of the mangroves and its associated habitats (seagrass and mudflat) by using all our five senses,” said Chow.

As a CSR project, Forest City is setting up such a centre, and MNS has been invited to be its partner. In due time, this centre could be where people learn about mangroves, as well as all their extensive and marvellous wonders and secrets.