The movers and shakers of 2020 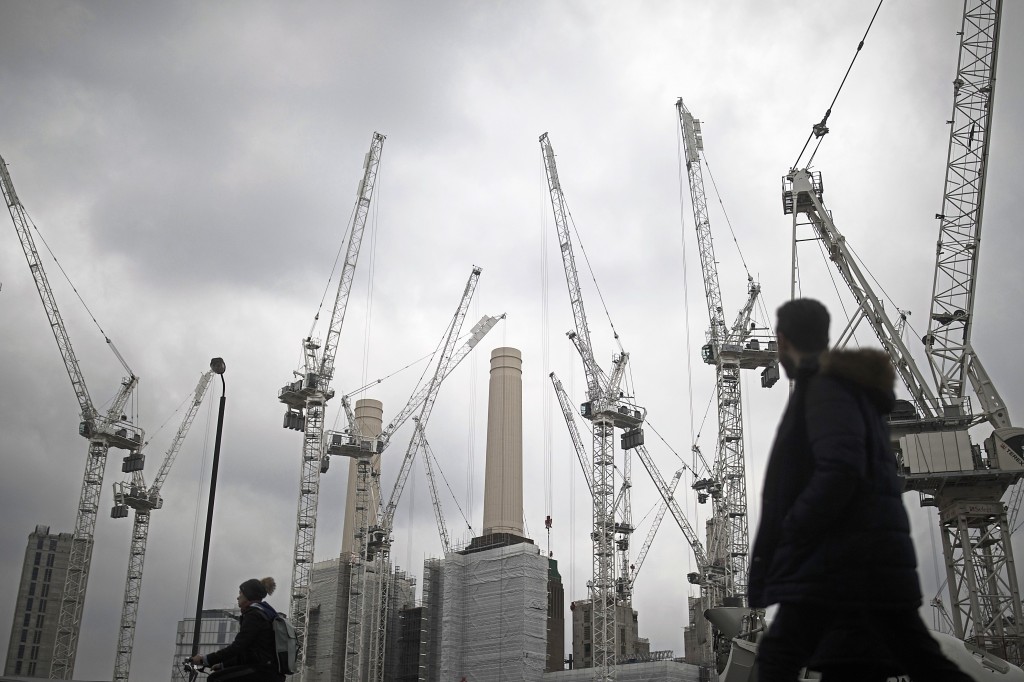 The movers and shakers of the property market in 2020 are unsurprisingly, among the top players in the industry because they actively remain positive in the eyes of property stakeholders. All eyes are on the ‘big boys,’ namely SP Setia Bhd, Sunway Group, Sime Darby Property Bhd and UEM Sunrise Bhd – all long-standing stalwarts of the industry–to lead the way.

ExaStrata Solutions Sdn Bhd chief real estate consultant and CEO Adzman Shah Mohd Ariffin said these big companies are noted as game changers because their properties have been in keeping with new lifestyle concepts and are well received by the public, with most being repeat buyers.

He stressed that for movers and shakers to rock the property industry, they would need to be developers of distinction. The qualities of such developers would include a visionary leader or leaders, the ability to come up with innovations and the readiness to evolve to match the needs and requirements of buyers and investors, and maintaining high quality standards of development in terms of lifestyle, concept and construction.

“Big and successful developers have good sales track records,” he said, pointing out that a good track record also refers to their reputation as good developers especially when it comes to timely completion and delivery of the units.

An analyst said the projects from such developers tended to see greater capital appreciation. Chester Venture Bhd group executive chairman Datuk Howard Chew took it one step further: “A zero defect and perfect score of 100% will make a developer into the shaker of the industry.” 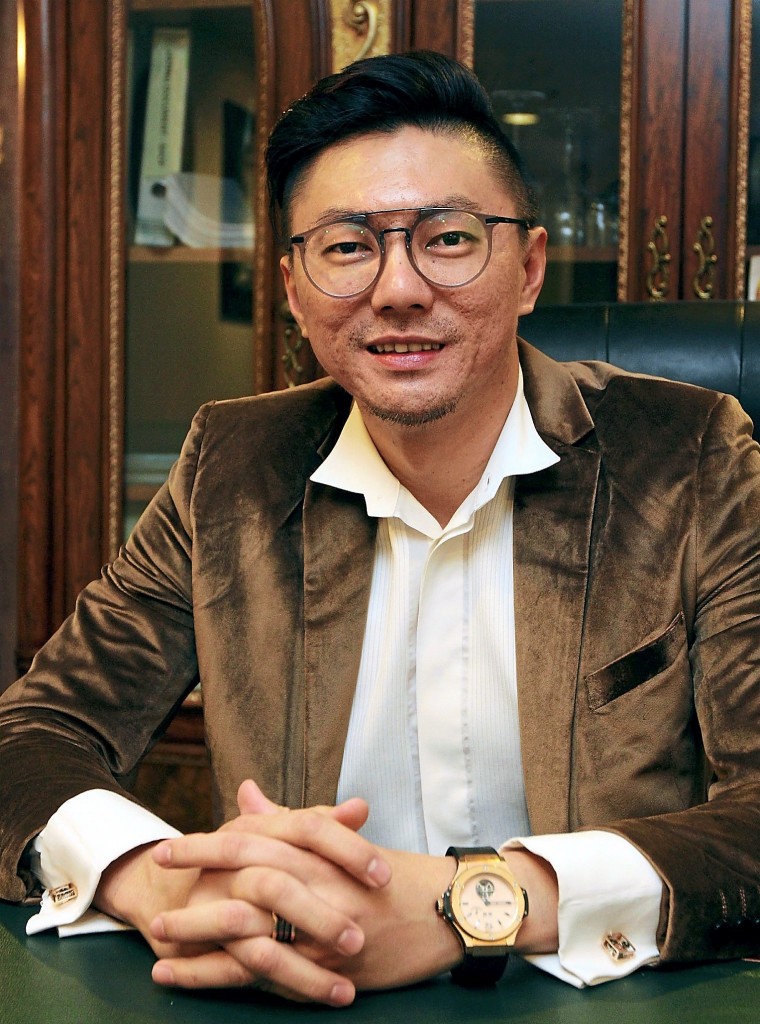 A zero defect and perfect score will make a developer into the shaker of the industry, said Chew.

As the above standard is near impossible, developers have to take heed that today’s customers are concerned about defects and quality of the project, the analyst informed StarProperty. “But movers and shakers of the industry does not necessarily need to be in the upper echelon of the property market; those providing affordable yet quality housing also fall into this category, he said.

“So that Malaysians can own a home with affordable pricing with full facilities,” he continued. Adzman pointed out that the movers and shakers on his list have projects situated domestically as well as internationally with good qualitative features. They are financially strong and can provide good promotion initiatives to buyers especially first homebuyers. 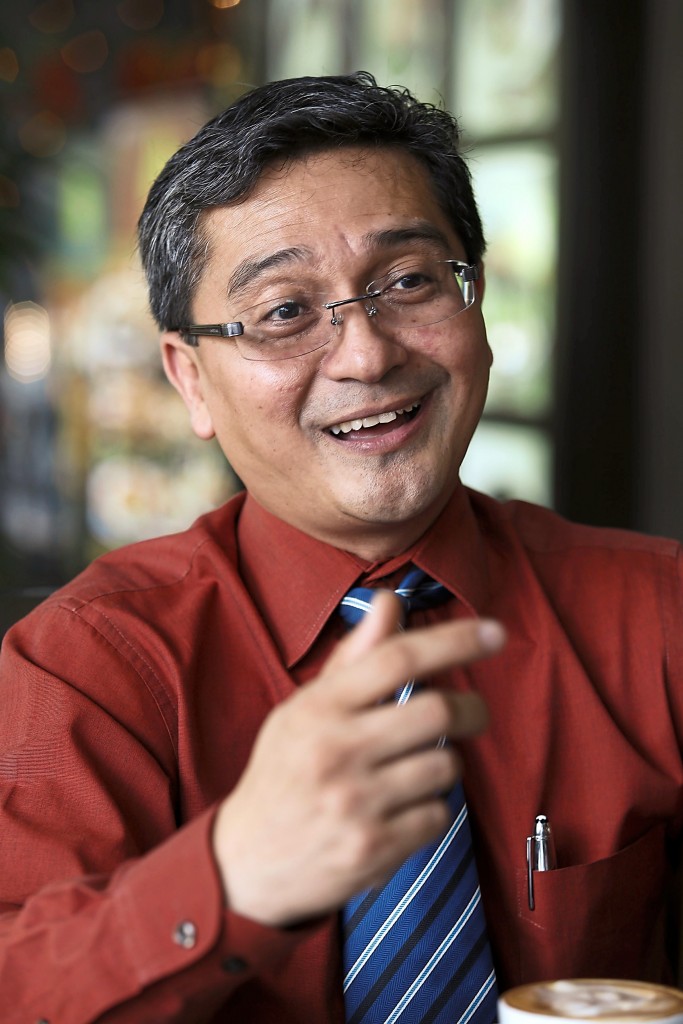 They are game changers because their properties have been in keeping with new lifestyle concepts, said Adzman.

While the property experts have their own selection criteria, several big names crop up. For example, Khong’s list of top three developers for 2020 are SP Setia, Sunway Property and Sime Darby Property as they already appear to be taking a lead in the market in their own rights.

Chew’s top three also included SP Setia and Sunway Property, while his third is UEM Sunrise. For Adzman, his chosen list are SP Setia, Sime Darby and Mah Sing Group Bhd. Mah Sing was on his list because it launched RM2.2 bil worth of properties in 2019 and had built up a land bank totalling 2,086 acres. Several other developers also appeared on the list of movers and shakers despite being smaller developers but their tie-in with branded names make them formidable shakers.

“SP Setia is one of the best-known real estate companies and it has consistently taken home top awards from various esteemed organisations,” Khong told StarProperty. It is one of Malaysia’s leading, listed, real estate players with a portfolio that encompasses townships, ecosanctuaries, luxury enclaves, high-rise residences, commercial and retail as well as integrated mixed developments.

In addition, SP Setia is a diversified multi-disciplinary property developer. The group is at the forefront of branding in the property industry, holding steadfast to its development philosophy. Its ability to connect communities, create ecological features and sustainable living environments that enrich the lives of its residents has made the Setia brand synonymous with strength, reliability and value creation.

“SP Setia has built a commercial number of venues in Malaysia including the Setia City Convention Centre on the outskirts of Kuala Lumpur. In addition to its ventures in Malaysia, they have since expanded globally, into Singapore, Australia, Vietnam, China and the United Kingdom, and most recently, Japan, granting them the moniker of a truly international property developer. 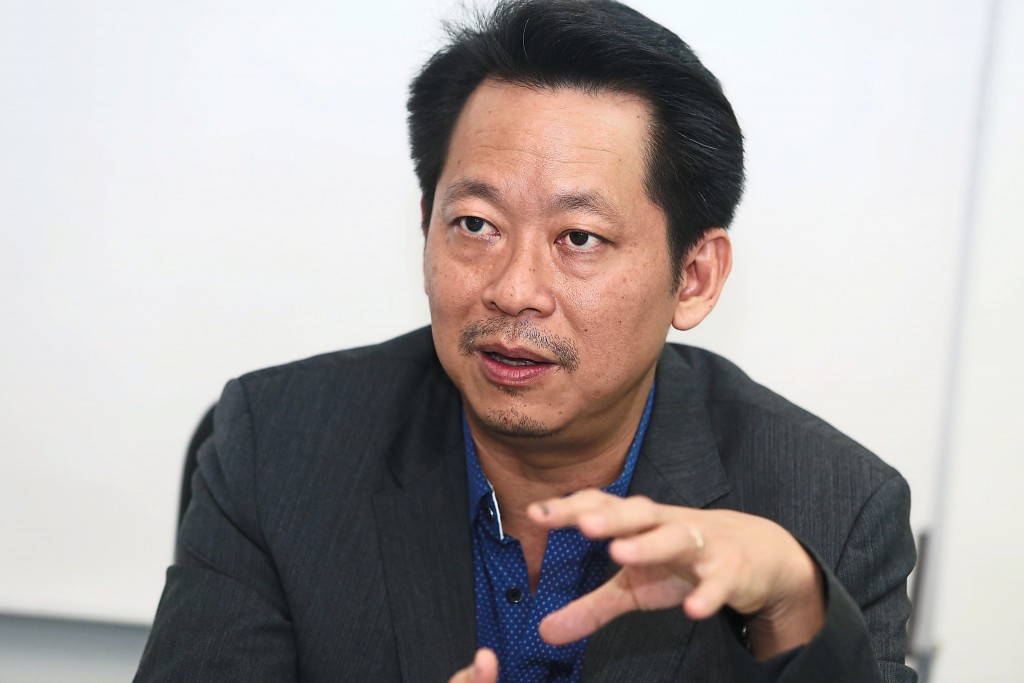 Khong said the movers’ strong branding, good track record and the number of on-going projects put them on the list.

Khong pointed out that Sunway Property, the group’s property division, is well known for its Bandar Sunway, with its distinctive Sunway Pyramid shopping mall and theme park incorporated within this township, and its Lost World of Tambun.

“These successful and sustainable development projects have earned them a reputation as one of the best developers and won them lots of awards. Sunway Property has also expanded beyond Klang Valley into Johor and overseas.

“In China, Sunway has developed a number of both residential and commercial properties, and in Singapore, it has Sunway Avant Parc, a luxurious terrace homes development. “In Malaysia, it offers a wide range of development projects and lately, with its higher end Sunway Montana-Courtyard Villas and Vivaldi Signature, to the entry level product of Sunway Avila offering a taste of the Sunway’s quality projects,” he said.

The company also has vast experience in managing and developing innovative and quality residential and non-residential properties, which include retail, leisure, healthcare, hospitality and commercial assets.

Sunway Property delivers products and services of good quality and value to its customers. This helps solidify its status as a leading community master developer with a high growth property development segment and a stable base of income from high yielding property investment segment. To date, the group has a portfolio with successful and internationally acclaimed properties in Malaysia and abroad, including China, India, Cambodia, Vietnam, and Singapore. 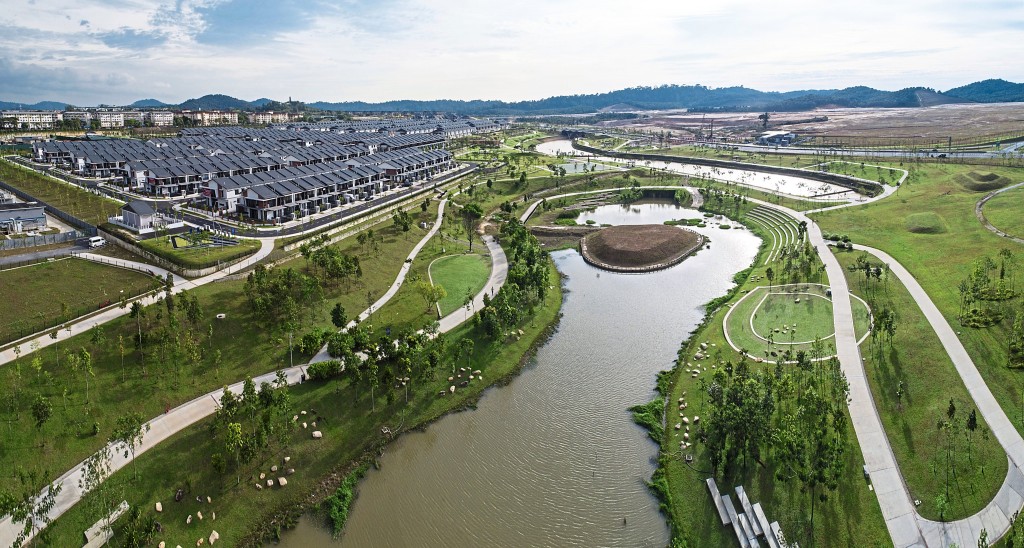 An aerial photo of the Central Park at the City of Elmina.

“With revenues exceeding RM2bil per annum and a healthy debt-to-equity ratio, Sime Darby Property is clearly one of the top developers around,” he said.

Sime Darby is synonymously known for its KLGCC Resort, which sits right on the edge of Kuala Lumpur’s city centre and the majority of their prime projects here are developments set in a green but urban environment, he said.

In addition, the developer is also involved in the Battersea Power Station project in London as it is one of the JV partners alongside SP Setia and the Employees Provident Fund. The notable township projects by Sime Darby Property is a long list, which includes Ara Damansara, City of Elmina, Putra Heights and Subang Jaya City Centre. 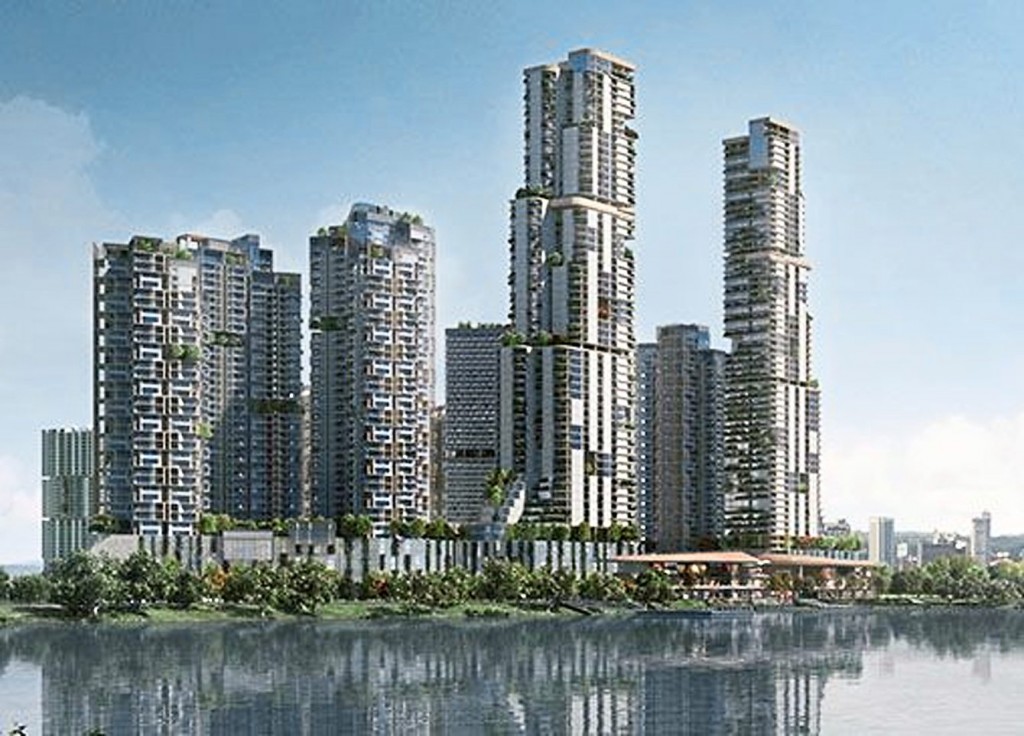 UEM Sunrise will use its winning formula to replicate Mont’ Kiara success for Kiara Bay.

UEM Sunrise’s latest flagship project will be their RM15bil Kiara Bay project in Kepong, which is expected to emulate their successful Mont’ Kiara formula, and turn this new integrated development into the next Mont’ Kiara. The developer also have several on-going projects. UEM Sunrise’s developments in Johor have been progressing well with the commencement and completion of several key play projects which are catalytic in nature, says a property analyst.

Some 76% of UEM Sunrise’s developable landbank (about 10,000 acres) is in Johor, with 49% or 6,379 acres in Iskandar Puteri and the remaining in Desaru, Kulai and Mersing, he said. Most of its land is in Johor but it also has sizable lots in the Klang Valley, he said, adding that it has several properties in Australia and South Africa. UEM Sunrise’s overseas projects have been the saving grace as they helped the developer weather the current property slowdown in Malaysia.

Mah Sing has been making waves this year but 2020 will see them driving several projects forward, says Adzman. Among next year’s agenda are Southbay City in Penang and Meridin East in Johor, one on each end of the Peninsular, he said. Also expected are several other smaller projects scattered across the Klang Valley, he said.

Judging by this year’s outing, Mah Sing has been successful in many of its launches as they are listening to the market and tailoring their products accordingly to their buyers’ feedback and improving on those expectations, said the analyst. 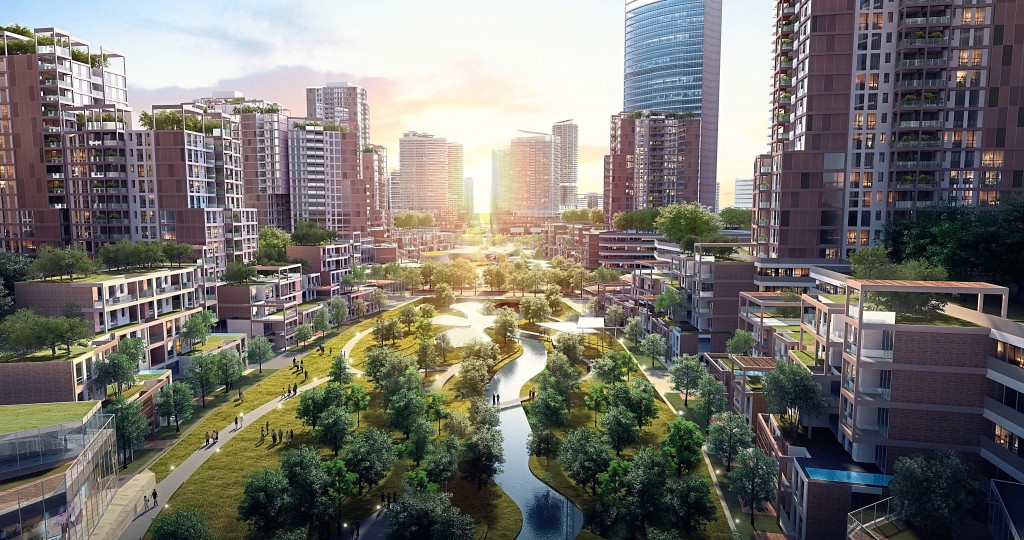 An artist impression of part of the on-going Gamuda Cove project.

The property analyst also pointed out that having brand names attached to properties also help to strengthen the name of a developer. When branded residences are associated with famous hotel operators like Four Seasons, Banyan Tree and St Regis, their own reputation as developers are also automatically elevated, he says.

Developers such as Oxley Group from Singapore and KSK Group are bringing the famous European brands (luxury 5-star hotel) like Sofitel and Kempinski respectively into KLCC market. Due to the reputation of the brands and attractive location within the high-end sections of the city, projects with branded names tend to pull in the high-end crowd.

Premiums on such property can easily breach the RM3,000 per sq ft pricing, he said. Branded names from developed European countries or United States of America help investors feel more confident with the quality of property and services, potential of higher capital appreciation due to their uniqueness and design, ease to secure tenant. And as a result, they also feel more comfortable in investing in such developments